To share your memory on the wall of Francis Riley, sign in using one of the following options:

HB (HillBilly), Dad, Papa or just Riley passed away unexpectedly on Saturday June 5, 2021. Born on
February 11, 1951 in Big Otter, West Virginia to Harry Floyd Riley and Laura Wanita Boggs Riley
Mollohan. Dad graduated from Clay County High School in 1969 and later attended West Virginia
University (GO ‘NEERS). In March of 1971, Dad married the love of his life (well his first one) Linda Lou
King. The mountains of Utah called his name in 1978 and until the hills of West Virginia called him back
in 2017, Utah was his home.

Dad worked as the World’s Best Mechanic (he had the mug to prove it). He did more free work than
paid over the years, as he believed that being a caring and giving person was more important than a
dollar. Dad never met a stranger and was a generous and kind soul that many times stopped on a
highway to help a motorist fix their car so they could safely get on their way.
Dad loved the outdoors and everything that involved being outdoors. He loved to hunt, fish, hike, and
honestly just sit in the fresh air. Hunting with his son-in-law was his most recent story to tell (and BOY
could he tell stories). As kids we spent most weekends at the sand dunes riding motorcycles or in the
hills looking for Big Foot.

Per Dad’s wishes he was cremated, and no formal services will be held. In lieu of flowers we request as
family that you be kind, help a stranger and make sure you spend time with the people that bring you
happiness.

To send flowers to the family or plant a tree in memory of Francis Paul "HB Hillbilly" Riley, please visit our Heartfelt Sympathies Store.

Receive notifications about information and event scheduling for Francis

There are no events scheduled. You can still show your support by sending flowers directly to the family, or planting a memorial tree in memory of Francis Paul "HB Hillbilly" Riley.
Visit the Heartfelt Sympathies Store

We encourage you to share your most beloved memories of Francis here, so that the family and other loved ones can always see it. You can upload cherished photographs, or share your favorite stories, and can even comment on those shared by others.

Posted Jun 10, 2021 at 06:43pm
Francis was my first cousin and will always be remembered by me as a great human being. We always had fun talking and although I didn't see him much for many years, until a family reunion in 2017, he will never be forgotten for the man he was. My deepest sympathy to his family and friends. God Bless all of you until I see you again. Love, Chuck
Comment Share
Share via: 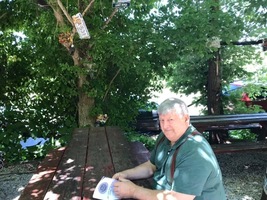